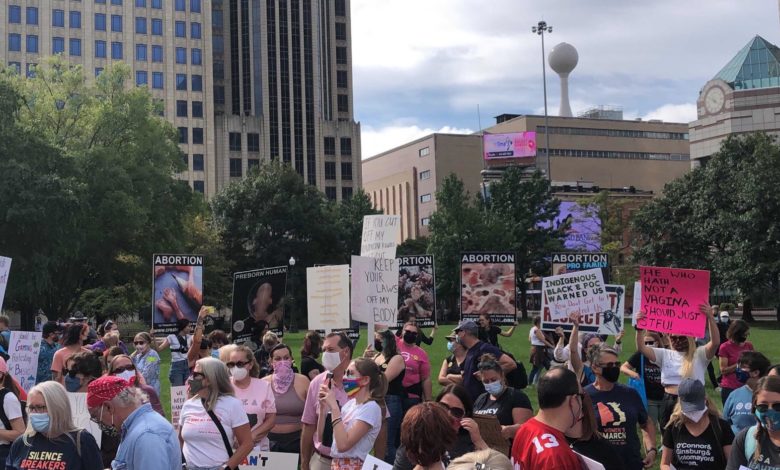 On October 2, more than 1,000 people came to Columbus, Ohio, State House to demand legal abortion now, an end to the war on the right to choose and access to safe, accessible and affordable reproductive care. . The action was organized by the Women’s March, with the participation of Democratic Socialists of America, Planned Parenthood and others.

Ohio recently introduced an anti-abortion bill (Senate Bill 123) that outright bans abortions, even in cases of rape and incest. This “trigger bill” would also criminalize the so-called “promotion of abortions” as well as the charge of “manslaughter by abortion” to any physician performing the procedure. It would come into effect when Roe v. Wade is overthrown nationally.

Ohio currently has one of the most anti-choice governments in the nation, as the Senate, House, and Governor are all against choice. In section 2919.195 of the Ohio Revised Code, abortions in Ohio are prohibited after a fetal heartbeat is detected – although this has not been enforced due to legal challenges.

Protect the health of women and LGBTQ + people

The people of Columbus have come forward to let the reactionaries know that they will not stand idly by and let these anti-choice bills dictate life in Ohio, and that they will fight to protect women’s health and LGBTQ + people in the area of â€‹â€‹reproductive health.

Counter-demonstrators with large graphic signs met the demonstrators on the ground, mingled and argued with the police. However, they were largely ignored as masses of people chanted and applauded a person’s right to choose. Protesters were holding signs reading “Abortion bans are a class war” and “If you take away my reproductive rights, can I take away yours? And chanted slogans such as “What do we do when we are attacked?” Get up, fight!

Columbus was ready to stand up and fight back. As the organizers climbed the stairs of the State House, they announced that there would be speakers, a short walk, and then a voter registration drive. Allison Russo, a Democrat from House District 24 who is running for office this year, first spoke about the assault on reproductive rights and how she thought the problem was “radical politics, voter suppression and gerrymandering â€. She ended her speech by plugging in her campaign.

While anti-choice politicians should certainly be eliminated, unfortunately, time and time again throughout the event, attendees were told that voting alone would change everything. This reinforces the broken system in place, as voting is often touted as the alternative to what really brings about change – organizing and mobilizing the masses for justice in relation to reproductive rights and in the broader movement for it. self-determination, human rights and socialism.

A Christian Reverend gave land recognition and prayer to the Indigenous Nations whose lands we occupy.

The march was greeted with car horns and cheers of solidarity. It ended at the State House. Unfortunately, only ten percent of the original crowd were left at that point to hear a few notable speakers remaining. One community member spoke about the fight for reproductive rights as an indigenous woman, and another spoke about the fight against human trafficking around Columbus, with its epicenter in the working-class Hilltop neighborhood. A socialist explained that this fight takes more than a vote and how Roe v. Wade was originally won by the activist and LGBTQ + women’s liberation movements of the 1960s. A trans organizer pointed out that this problem doesn’t just affect cisgender women; it affects everyone who has a uterus, whether they are women, trans men, non-binary, gender non-conforming or otherwise.

Matthew Meyer of PSL Chicago, who attended the march, told Liberation News: â€œThe Supreme Court’s inaction on Texas SB8 has once again shown us that an unelected body of the ruling class cannot can be invoked to protect our fundamental rights. We are here to demand safe and affordable reproductive health care for all through the Women’s Health Protection Act. This legislation would federally codify the right to a legal abortion, finally removing that key element of leverage that the Democratic Party continually uses to coerce American citizens to vote for them against their own interests. “

Despite the limitations, the mobilization of progressives in Columbus was resounding, and incredibly important to the fight for women’s rights and LGBTQ +.