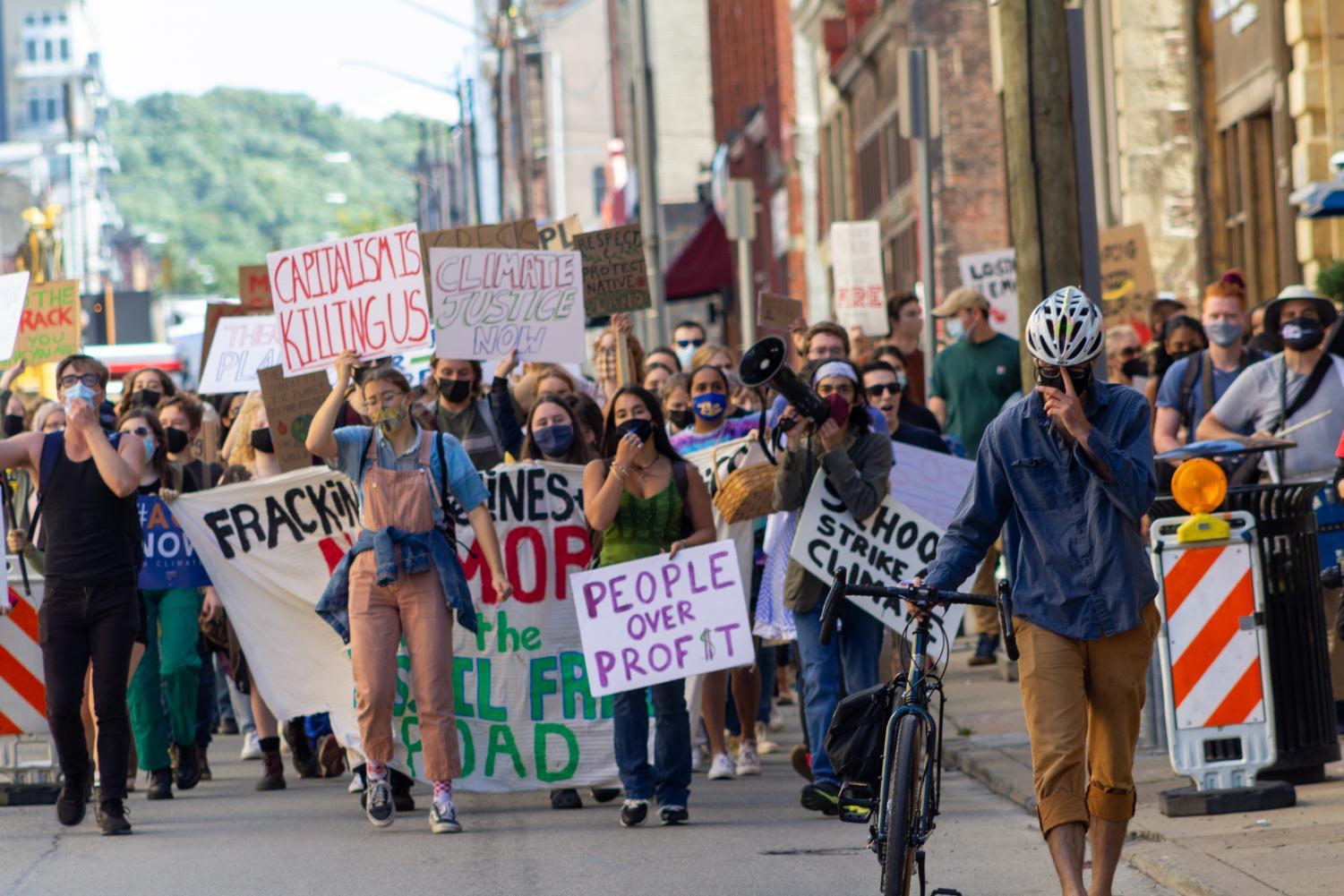 More than 200 protesters marched on Fifth Avenue on Friday to demand climate justice. Protesters chanted, “No coal, no oil, keep your carbon in the ground!”

Pittsburgh Sunrise Movement organized the Pittsburgh climate strike on Friday to defend three demands – representing young people in local climate decisions, outlawing fracking and taxing big companies in order to create more green infrastructure. The protest began at Schenley Plaza with a gathering of people of all ages, from high school students to seniors, and ended in the City-County Downtown building.

It was the second Climate strike of the year organized by Sunrise Movement Pittsburgh. The group held a protest in March, which began in Flagstaff Hill and ended with a rally of the group outside the Cathedral of Learning.

According to several speakers at the event, protesters want large companies in the Pittsburgh area, like UPMC, to pay “their fair share” and be taxed more to help fund environmental programs. Organizers planned to submit these demands to Allegheny County lawmakers in the City-County Downtown building.

Elise Silvestri, senior at Obama Academy 6-12, said it was important to have greater representation of young people in climate decisions.

“We [young people] can talk about these issues like the climate crisis with a lens that older people may not be able to do, ”said Silvestri.

Luna Plaza, a Pitt student who spoke at the protest, began her speech by acknowledging that the protesters were currently standing on “stolen land”. Plaza noted that the land where Pittsburgh is located originally belonged to Native American tribes such as the Adena, Monongahela, Delaware, Shawnee and Iroquois.

Organizers encouraged strikers to skip their jobs and quit classes to attend. One of the organizers, Ilyas Khan, a senior at Winchester Thurston School, said he missed a biology quiz to lead the strike. Khan also encouraged those in attendance to vote for those who support climate justice.

“Whatever your political orientation, whatever your position on the climate [change], this conversation is for all of us, ”Khan said. “We are a country that has the power and the resources to make a real difference now and to help ourselves and help save the planet as a whole from potential ecological devastation.”

Protesters carried signs with them as they marched chanting, “Hey hey, ho ho, fossil fuels must be gone.” Some of these signs read “Listen to Indigenous Voices” and talked about banning fracking.

Students and young people were not the only people in attendance – half a dozen members of the Raging Grannies gave a brief acapella performance at the event.

“We are here to support the young people and this march. We’re the Raging Grannies, we sing protest songs, so we’ve brought three of our climate songs and we’re here to say we need to do something now, ”said Susan Smith, a Raging Granny.

Impoverished communities are more exposed to environmental risks such as climate change than richer communities, according to CNBC. According to a federal report, it is the poor who will suffer the most from the effects of climate change. Several speakers said they wanted to educate lawmakers about poverty in the Greater Pittsburgh area.

NaTisha Washington, an environmental justice organizer with A Pennsylvania, a civic engagement organization, explained at the event that it is good to have open, albeit uncomfortable, conversations about climate change.

The protesters finally arrived at the City-County Building after two hours of marching. There, around 10 speakers expressed their support for the Green New Deal and climate justice. Protesters also handed out scripts that voters could use as a guide when calling their local representatives, encouraging them to take action on Senate Bill 435 and Bill 1555. Both bills provide for green infrastructure, such as utilities and solar installations.

Much like the way the protest began, the protest ended with a recognition of the land for indigenous peoples.

Washington said it was important for people to start listening to what climate activists are fighting for.

“It’s a time when people are heard and more and more people are held to account,” Washington said. “I want better for the future of my community.