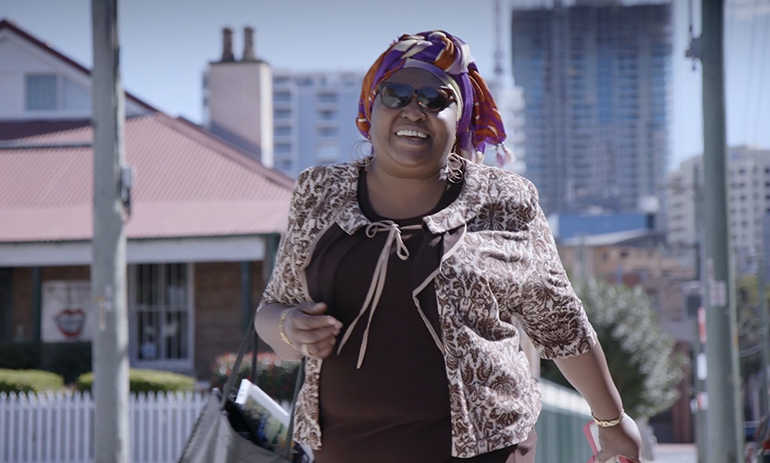 Rosemary Kariuki’s mission is to empower migrant women. She is the inspiration for the documentary Rosemary’s Way. Here, Ros Horin and Jackie Turnure talk to Wendy Williams about the movie and ask if a person can accomplish so much on their own, what can we all do together?

From the moment Rosemary Kariuki bursts onto the screen, it’s hard not to be drawn to her.

Her infectious laugh exudes kindness and positivity. Those in her orbit describe her as a healer, a facilitator, a connector, an agent of change and “everyone’s mom”.

It’s easy to see why she received the Australian of the Year Local Hero 2021 award for her work advocating for migrant and refugee women.

Kariuki, a migrant herself, arrived in Australia in 1999 after fleeing Kenya to escape family abuse and tribal clashes.

His first years in Australia were lonely. But it was this experience that helped her recognize how isolation is a problem for many migrant women.

Now employed as a multicultural community liaison with NSW Police, Kariuki’s initiatives include the African Women’s Dinner Dance, the African Village Market (which helps migrants and refugees start their own businesses) and a cultural exchange between refugee and migrant women and rural Australian women. .

Throughout Rosemary’s Way, we see her empowering the women around her, luring them out of cultural silos, exposing them to new experiences and inviting them to participate better in Australian life.

But while Kariuki is certainly a force of nature, the documentary is as much about the women around him.

Many are not used to going out alone, have no transportation, and speak little or no English. They never went beyond the supermarket to their homes in suburban Sydney. They face extreme isolation, fear and loneliness and, in some cases, domestic violence and rape.

Over the course of a year, we see this group of vulnerable women, hailing from countries as diverse as Bangladesh, Iraq and the Congo, transform as Kariuki inspires them to take part in new adventures culminating in a stay of three. homestay days with rural Australian families. NSW.

Director Ros Horin told Pro Bono News that the film was a revelation to many people.

“I had a friend from Melbourne who called me the other day and said, ‘I just couldn’t believe people could be so lonely, or so isolated, or have seen so little of the country, that you can be here that long and not seen the beach, ”she said.

“I was completely stunned when I met Sufia [a migrant from Bangladesh who is featured in the documentary] and she said “I’ve been in this country for 20 years and this is my first time going out alone, and I have to learn how to make a friend, I’ve never done that before.” I was so moved by this statement, I just thought it was amazing, how is that possible.

Basically, the film is a celebration of the community. It offers a hopeful glimpse of what is possible when we come together.

While it’s a coincidence that the film was released during a pandemic that saw many of us locked in our homes, Horin says the film is exactly what we need right now.

“Isolation has been the fashion now,” she says.

“We all understand how important connections and community are, so I think this is a very appropriate time. Mostly because the film celebrates the power of community, connection and friendship and the women who support women.

She says the power of this movie – and the power of any good movie – is that it activates people. This was confirmed by the way the public reacted to Rosemary’s Way.

“Pretty much every time the movie is shown and we have a question and answer session, one of the first questions is what can / can I do to make a difference,” says Horin.

“I think it inspires people and makes everyone aware of how we live in silos. This is something we take for granted, we just accept on the surface that we are a very successful multicultural country without giving too much thought to what that means.

“But when you hear these women in Fairfield [a western suburb of Sydney] say ‘I feel like I’m living in the Middle East and I have to go to town to feel like I’m in Australia’ you kinda think wow we have to go out and do something.

Certainly the film highlights the disparity between our idea of ​​a multicultural Australia and the reality for many refugees and migrants.

Horin says one of the most telling moments for her was realizing how migrants themselves want to see more cultural diversity.

“[I was stunned] when Pasca said she had lived in Auburn for 10 or 12 years and had never actually had a conversation with an Australian. She just sees other women who look like her, ”says Horin.

“The fact that they feel trapped in silos, I didn’t have that feeling before. I think the government assumes that all Africans like to be in the same community… I was really amazed to hear it from their point of view, that they want more diversity and want to feel more part of this country.

This is something the film aims to help.

Jackie Turnure, impact producer on Rosemary’s Way, told Pro Bono News that while they can’t clone Rosemary and send her to Australia, they can work with people like her.

As part of the impact campaign that was built around the film, they brought together a group of different partners – including the Settlement Council of Australia, Settlement Services International, Community Migrant Resource Center and The African Women’s Group – to secure the documentary and community activation kit specially designed in remote and regional communities across Australia.

In particular, the film is working with the Country Women’s Association to roll out a 12-month tour that combines screenings from Rosemary’s Way with a suite of resources to help women connect after the film.

The idea being that this series of film and cultural exchange events, which will include food and dancing and all the fabulous things you see in the movie, will then inspire either a monthly picnic or a annual multicultural dinner or a dance or whatever. the community thinks it’s appropriate for them, ”says Turnure.

“That way we can really use the film, which is a celebration of the connection, to bring people together not just around the film but beyond the film – and it will be a wonderful impact if we can make it happen.”

The objective is to strengthen the capacity of the community to provide support to migrant women, both newly arrived and established, with the ultimate vision of an Australia where everyone feels they belong and is safe, supported and connected.

However, Turnure is quick to point out that this is a popular campaign.

“Right now we’re starting from scratch and working our way up,” she says.

“It’s not a done deal, we don’t have an impact campaign budget, we are applying for funding.”

Anyone can help by organizing a screening in their city.

Ultimately, Horin says the message of the film is that it is our responsibility to welcome newcomers to this country and help them connect with Australian society.

“It’s not a tough responsibility, if we do, it’s something that brings rich rewards, we always get so much in return for reaching out,” she says.

“When everyone feels in their place, everyone wins,” she says.

“And these are not expensive and complicated things. Sometimes a cup of tea can change a person’s life.

Rosemary’s Way is screened in select theaters via FanForce.

To find a screening near you or to organize your own screening see the website.

Each month, Pro Bono Australia and the Documentary Australia Foundation present a Doco of the Month, featuring powerful documentaries with a social impact at heart.