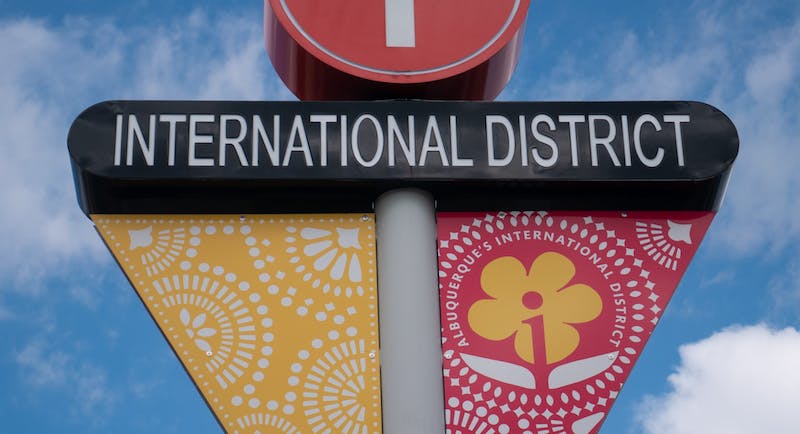 The International District, one of Albuquerque’s less affluent neighborhoods, might as well be the poster child of environmental injustice. This ethnically diverse area is at the heart of climate change, seen through the urban heat island effect, which materializes in the development of substantial infrastructure such as concrete buildings and asphalt in cities.

The effect causes cities to absorb and trap heat in areas like the International Quarter, which is an area between Lomas, Eubank, Gibson, and San Mateo. This trapped heat results in warmer temperatures during the day and less cooling at night, which has a particularly big impact on New Mexico’s most densely populated neighborhood. The rise in temperatures in the International District is due to a wide range of anthropogenic influences, but it is certainly worth highlighting the destruction of natural land cover and the lack of forest cover.

Frankly, the data is alarming. As of 2011, the International District is approximately 3,174 acres, and of that area 1,583.9 acres (49.95%) is “plantable space”, meaning trees could grow there. they were seeded, according to USDA Forest Service software. i-Tree. Although the potential for planting is abundant, only 18.4 acres (0.58%) of the International District has a canopy.

The canopy of trees provides a natural barrier to intercept sunlight that would otherwise be absorbed by urban surfaces. This barrier creates shade that keeps temperatures down and serves to mitigate the impacts of warming.

The shade provided by the trees has a significant impact on the surface temperatures of the area, with a reduction of 20 to 45 ° F from the maximum unshaded temperatures, according to Environmental Protection Agency.

There is both a clear need for shade and an opportunity, given the neighborhood’s “plantable space”. The separate opportunity here has been overlooked as conversations about how to overcome the growing impacts of climate change seem to be reserved for the wealthy.

It is essential to note that the lack of canopy – and the resulting urban heat island effect – is quite exclusive to low-income areas like the Albuquerque International District and the South Valley, which corresponds to the problem on a slightly less serious scale. Disparities in temperature and access to the canopy are clearly correlated with income-based inequalities.

The median household income for the International District was $ 26,201 compared to the median income of $ 49,878 for all of Albuquerque, according to a 2016 Bernalillo County urban agriculture project. report.

Agricultural resources and the tree canopy are a relevant element in cultural and socio-economic discussions and it is something that tends to mean the richness of the community, such as an analysis on trees and poverty by the New York Times illustrated. Cities where low-income communities suffer from a lack of canopy are complicit in the perpetuation of environmental racism.

Often, it is global economic actors who release obscene amounts of greenhouse gases through industrial and commercial activities, but disadvantaged communities are those who suffer the disproportionate impacts of emissions because their environments are not conducive to climate change. adaptation to extreme climatic activities.

In addition to the more extreme temperatures, the lack of equitable access to trees in impoverished areas also results in an increased need for electricity during the summer months. Trees and shade would reduce the need for air conditioning, which is powered by fossil fuels.

Air conditioning should be seen as a human right and efforts to reduce surface temperatures through the development of green spaces – be it canopies, rooftop gardens, playgrounds, etc. – must be taken into account to support the public health of communities.

Climate change and its adverse effects will happen to everyone, but not everyone will experience the severity of these effects the same, with increased financial and social capital in some areas helping to mitigate the worst. Racial and environmental justice are inextricably linked, as one continually sees in insufficient forest cover in low-income minority communities.

Rebecca Hobart is a freelance journalist for the Daily Lobo. She can be contacted at [email protected] or on Twitter @DailyLobo