Cripchick DISCOVER THE ART OF PUBLISHING
Home Impact producer On the 21st anniversary of 9/11, Al-Qaeda publishes a message from an anonymous leader glorifying the preparers

On September 10, 2022, Al-Sahab, the media arm of Al-Qaeda’s Central Command, released a message marking the 21st anniversary of the September 11 attacks, titled “Gains – The Day Of Criterion, The Day Of Badr, And The Criterion From Age to September Day.”

The eight-page post, which did not include the name of the author or leader, glorified the 9/11 attackers and described the attacks as an extension of the Battle of Badr, an hour-long battle that took place in the 624 between a small group of Muslims led by Muhammad and a larger group from the tribe of Quraysh, resulting in a decisive Muslim victory. The message highlighted the impact of 9/11 on the United States, suggesting that the attacks were the beginning of the collapse of the United States on all levels.

The message, which is similar in style to those prepared by slain al-Qaeda leader Ayman Al-Zawahiri, who was killed in a US drone strike in Kabul on July 31, begins by emphasizing the importance of the Battle of Badr, saying that despite the long record of victories in Islamic history, Badr has special significance due to the low resources of the Muslim fighters at that time, who were mostly equipped with their faith and courage.

After a lengthy description of the Battle of Badr, the message discusses the significance of 9/11, emphasizing that it has a similar impact on the global course of events.

Quoting American author Paul Kennedy, who is said to have written that 9/11 marked a turning point in the shaping of 21st century events, the message asserted that “America will never return to what it was before the collapse of its greatest icons: the Pentagon, seat of the United States Department of Defense – the greatest power in the history of mankind, and the World Trade Center, a skyscraper that represents its economic hegemony and the frightening financial domination of American capitalism.

The “timeless” attacks of September 11 were unexpected

The message argues that the significance of the September 11 attacks lies in the fact that they were totally unexpected. “The attacks hit America in a place it never considered or anticipated.” Recalling the day of the attacks, the message highlights the leadership of slain al-Qaeda leader Osama bin Laden, saying that the American press reported on the day of the attack that “a Muslim named Osama bin Laden, in the farthest corners of the earth and into its forests, hurled four spears [i.e., airplanes] from Kandahar to Washington and New York, and three of those spears have touched the military and economic heart of the United States. » 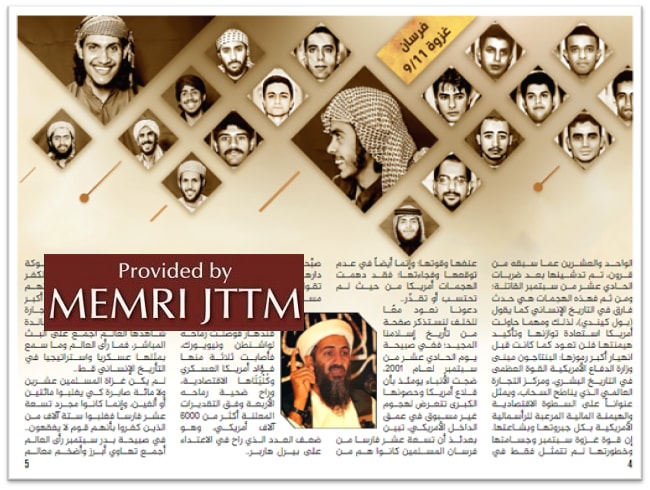 He further boasted that 9/11 killed more people than those killed in the attack on Pearl Harbor. Glorifying the impact of the attacks, the message describes them as “a timeless Islamic conquest that the whole world has watched live”, adding that “the world has never seen or heard like them before, militarily or strategically”.

The September 11 attacks sparked conflict among the Crusaders

Elaborating on the impact of 9/11, the message claims that it sparked an internal conflict among the “crusaders”, claiming that Western Europe with its Catholic majority as well as Eastern Europe and its Orthodox majority, attempted to exploit the attacks “to take down Protestant America” ​​from world leaders.

The post further boasted that 9/11 dealt a severe blow to the US intelligence community, saying it cast doubts among the American people and the world about the effectiveness of their intelligence services.

“What made Americans and others wonder: what if this attack was launched by a superpower or even terrorists who possess lethal weapons such as nuclear or bacterial weapons!

Discussing the economic impact of the attacks, the message pointed out that targeting the World Trade Center “has crippled the global and American economic system.”

The message concluded: “I don’t think anyone, regardless of their analytical skills, imagined that nine knights were capable of destroying, 6,000 miscreants in the country well known for its satellite capabilities and central intelligences, and a producer of accurate spy devices.” Praising Allah for granting the 9/11 attackers success in carrying out the attacks, the message ended with a poem praising their bravery that led to a unique assault that humiliated “the arrogance of the American crusaders”. 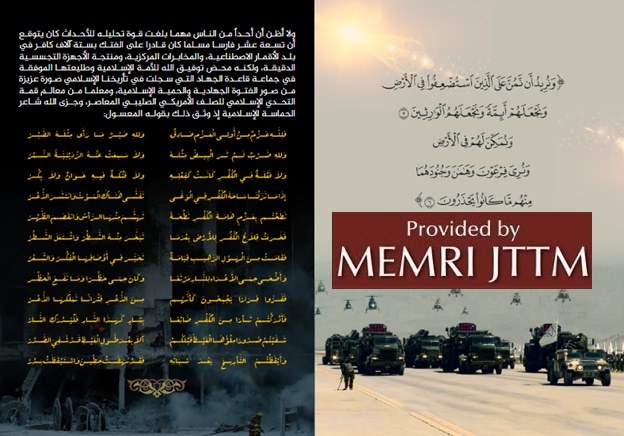 The post included a photo from an upcoming book by slain al-Qaeda veteran Abu Mohammad Al-Masry titled “9/11 – Between the Truth And Skepticism.” 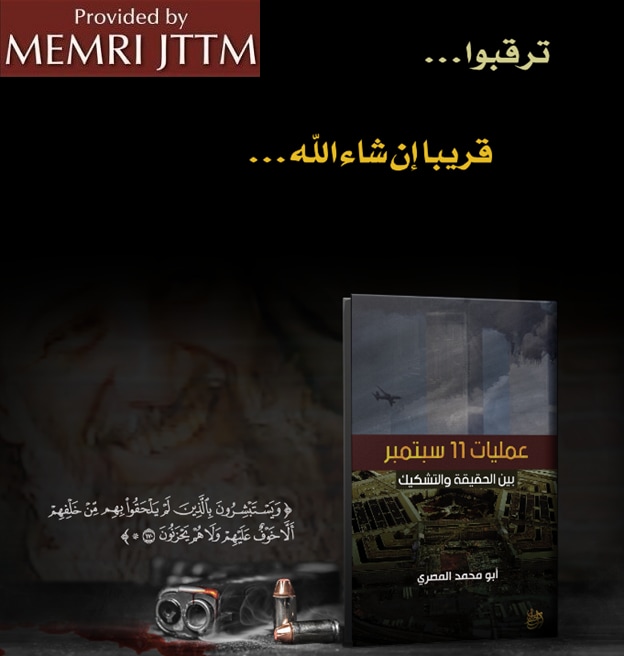