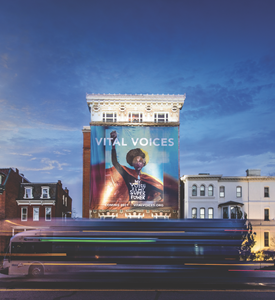 Washington, DC, June 30, 2021 (GLOBE NEWSWIRE) – Vital Voices Co-Founding Secretary Hillary Rodham Clinton announced the women’s leadership organization’s commitments to advancing the Sustainable Development Goals at the forum Generation Equality, including the exciting opening of Vital Voices Global Headquarters for Women’s Leadership. The global headquarters will serve as an innovation center dedicated to connecting women leaders and their allies so that together they can solve the world’s greatest challenges.

“Beijing was a turning point; today we are on another. We should approach this moment not with tired ideas and incremental steps, but with the boldness, leadership and resources to transform our world. Now is the time for us to come together again – women and men, public and private sector, those of us who were there in Beijing and the rising “Generation Equality”. There is nothing more powerful than our common voices calling for change – and our common efforts to make that change a reality, ”Secretary Clinton said. “I am delighted to announce Vital Voices’ commitments to achieving an equal future for us all.”

“This year’s Generation Equality Forum marks the anniversary of the Fourth United Nations World Conference on Women held in Beijing, China in 1995, where First Lady Clinton declared that ‘women’s rights are human rights’ – catalyzing a global gender equality movement, ”said Alyse Nelson, President and CEO of Vital Voices. “It is on this occasion, recognizing the progress made since this historic moment and the long road ahead to achieve true equality, that Vital Voices announces this bold commitment to the future of women and girls.

Officially open on International Women’s Day, March 8, 2022, Vital Voices Global Headquarters for Women’s Leadership will be a collaborative and inclusive space designed for all women, everywhere. In addition to Vital Voices’ staff and its global network of over 18,000 women leaders, the building will serve as a gathering place for women leaders and local and visiting organizations with limited resources who need a place to. come together, innovate, plan and act – all with the goal of solving the biggest challenges, from gender-based violence to climate justice, racial equity and economic recovery. Vital Voices will simultaneously launch the Headquarters Digital Twin – an interactive online hub showcasing events happening at Global Headquarters, providing resources and connecting leaders around the world so they can come together and collaborate online.

The building and digital twin are funded by a group of all-female donors, including designer and philanthropist Diane von Furstenberg, philanthropist Melinda French Gates, Spanx founder Sara Blakely, Vital Voices board chair Kate James and many others.

“Vital Voices is the world’s premier network of women leaders,” said designer and philanthropist Diane von Furstenberg, who chairs the project and made the biggest donation to the campaign. “Having a global headquarters in the nation’s capital is a dream come true – a place to meet and shake things up, knowing that when women connect, there is real power. “

“We hope that women from all over the world will come to this building to expand their networks, share their stories of successes and struggles, highlight their bold visions of progress and recharging so that they can return to the world and make a difference. reality. make change happen, ”said Faida Fuller, Chief Operating Officer of Vital Voices.

To learn more about how you can get involved, visit the Vital Voices website. For more details on Vital Voices Global Headquarters for Women’s Leadership, please see the VVHQ flyer.

About the Vital Voices Global Partnership

Vital Voices Global Partnership invests in women leaders who solve the world’s greatest challenges – from gender-based violence to the climate crisis, to economic inequality and more. We are ‘business catalysts’, identifying those with a bold vision for change and partnering with them to make that vision a reality. We scale and accelerate impact through long-term investments to build skills, connections, capacity and visibility. Over the past 24 years, we have built a network of 18,000 change agents in 182 countries, each of whom dares to reinvent a more equitable world for all.