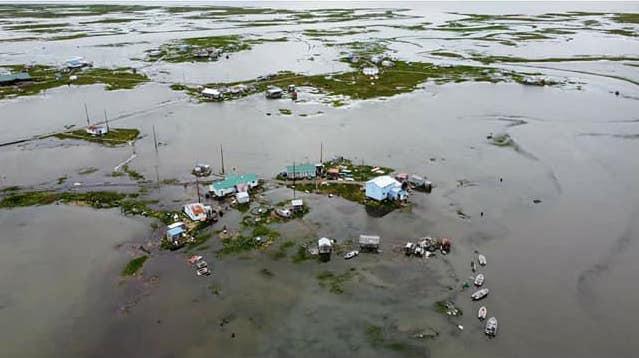 Kwigillingok, a community on the Bering Sea coast in the Yukon-Kuskokwim Delta, is accustomed to some flooding during high tides. But in recent years, these floods have worsened, reaching a new level last week.

The flooding began on Friday morning as the high tide began to rise.

“This is the worst we have ever seen,” said Gary Evon, the environmental coordinator of the indigenous village of Kwigillingok.

Aerial photographs posted on Facebook show a majority of the community submerged in water. One photo shows someone rafting around the village using a shovel as a paddle. The buildings in the city are high on stilts, so Evon said that water does not enter any structures. But 6 inches of water covered the ground below. Much of the community’s promenade was underwater on June 24, but Evon said residents have enough walkways to move around the village. On June 25, Evon said the village was flooded again with the next high tide.

A small flood is nothing new in Kwigillingok, but what is new is the increased severity of tidal flooding in recent years. Evon said it’s due to a changing environment.

Global temperatures are increasing at an accelerating rate. Temperatures in the Arctic are rising three times faster than in the rest of the world, according to a study by the Arctic Monitoring and Assessment Program. The permafrost beneath Kwigillingok is thawing, causing land subsidence. The lowered elevation makes the land more vulnerable to flooding during storms and high tides, and flooding melts the permafrost even more.

Evon said the community plans to relocate a few homes most at risk from erosion and unstable soil, but with the severity of the recent flooding, Evon said Kwigillingok is considering bigger solutions.

“The whole community is starting to seriously think about moving to higher ground,” Evon said.

Moving an entire community is as colossal an effort as it sounds. The Alaska Native Tribal Health Consortium has estimated the cost of relocating Kwigillingok to exceed $ 100 million.