Hanoi (VNA) – The United Nations Development Program (UNDP) is supporting Vietnam’s Ministry of Natural Resources and Environment (MoNRE) to strengthen gender mainstreaming in the National Adaptation Plan so that it is more gender sensitive and better able to respond to needs, priorities and challenges facing women, according to UNDP Resident Representative in Vietnam, Caitlin Wiesen.

Wiesen pointed out in an interview with the Vietnam News Agency (VNA) that women face a glass ceiling that prevents them from reaching the highest levels of leadership in environmental protection and climate action.

The impacts of climate change are not gender neutral, she noted, adding that climate change often exacerbates existing inequalities between women and men, the poor and other vulnerable groups.

Many international climate policies, many of which Vietnam is a signatory to, have recognized the twin goals of reducing gender inequality as a key tool for achieving climate action and building resilience to the impacts of climate change.

It is clear that poor people, especially women and ethnic minorities, are the most exposed to climate change because they have less capacity to adapt and cope with severe weather events such as storms, floods and drought, Wiesen said.

“This is clearly seen here in Vietnam – one of the countries most affected by climate change – from storms and floods along the coast, to salt intrusion in the Mekong Delta and droughts and landslides. of land in the central highlands,” she said.

In addition, these cooperatives have used several water-saving solutions, such as drip irrigation or low-pressure sprinkler irrigation, which has allowed better conservation of increasingly scarce water resources. in addition due to droughts, especially in the south-central coastal provinces.

The shift to climate-friendly green agriculture has paved the way for women farmers to sell their dragon fruits in lucrative green markets such as the EU, the UNDP representative pointed out.

She went on to say that Vietnam experiences many storms, extreme weather events and floods, and these weather events have a disproportionate impact on women and other vulnerable groups, as they have less ability to adapt to the events. severe weather.

UNDP, through a project funded by the Green Climate Fund, is helping vulnerable communities build resilience to storms by providing them with climate-resilient homes. 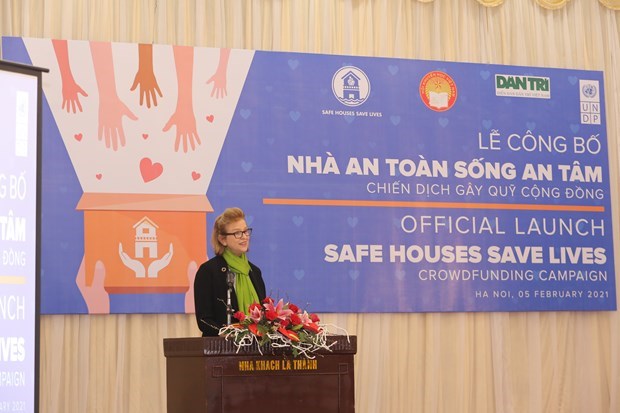 Caitlin WiesenUNDP Resident Representative in Vietnam, speaks during the launch of a crowdfunding campaign to build storm and flood resistant houses for poor and near-poor families in Quang Binh (Photo courtesy of UNDP) )

As documented during previous major floods of 2020, these storm-resistant houses not only protect women and their families before, during and after storms, but the houses also often become refuges for other vulnerable members of the community and allow women to restart their livelihoods. as soon as the waters recede.

Women have also participated in the design and construction of their homes and are building an empowered frontline of climate-resilient women one by one, she added.

UNDP, through the GCF project, has made a significant contribution with 4,000 storm-resistant houses, but there are still approximately 100,000 houses needed to meet the needs of vulnerable women and their households on the climate frontline and should be delivered in the name of climate justice.

Promoting women’s stewardship, contributions, participation and leadership is key to the success of climate and environmental solutions, Wiesen said./.