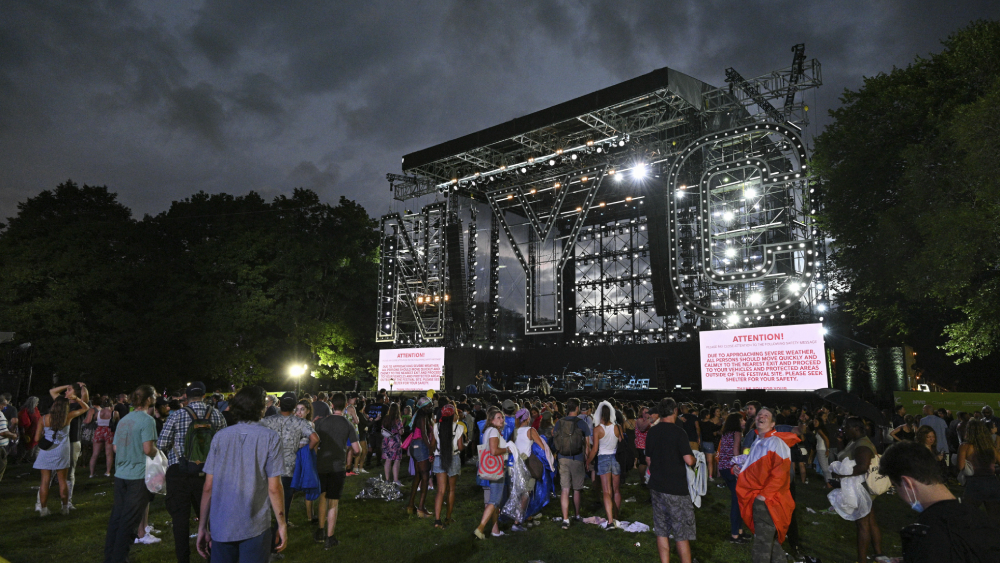 “We Love NYC: The Homecoming Concert,” the Central Park concert to be presented by Bruce Springsteen, Paul Simon, Patti Smith and others, was originally intended to celebrate all that is unique and glorious in the world. city ​​that 8 million people call home. Unfortunately, on Saturday night that also included the late summer showers typical of the region.

But even by region standards, the torrents of rain that fell were historic – according to the National Weather Service, the park experienced 1.94 inches of rain between 10 p.m. and 11 p.m., the most on record in a single hour since the service started tracking such metrics 150 years ago – and, due to the danger of lightning strikes, the park was quickly emptied of the roughly 60,000 spectators in attendance after brief sets from Jennifer Hudson, Carlos Santana, LL Cool J, Polo G, Andrea Bocelli, Earth Wind & Fire, Journey and Barry Manilow, among others. The headliners above never got a chance to perform.

As the storm approached, a series of lightning-fast decisions had to be made by series producer Doug Davis as well as executive producer Clive Davis and city officials including Mayor Bill de Blasio . Just over half of a scheduled five-hour show, in the middle of Barry Manilow’s performance at 7:37 p.m. the decision was made to stop the music and tell the audience to take refuge outside the park , while the concert organizers spent nearly three hours trying to find a way to continue the performances without a live audience but on CNN, which broadcast the concert live to 200 countries.

Doug Davis – who plays a key role in organizing his father Clive’s annual Grammy parties – was keeping his fingers crossed that another band showed up: a rainless weather band that would allow an hour of respite, just enough time. to deliver sets shortened by headliners like Springsteen, Elvis Costello, Maluma and the Killers, who were all still there.

“Bruce came over and was in his dressing room – he was there for a while,” Davis said. Variety. “Paul Simon lives across from the park, so he was in his apartment. Jimmy Fallon was in his car. We had so many people there waiting to see if we could make it happen. “

Removing it would have meant moving the performances from the main stage to a VIP tent erected for the guests, who were evacuated along with the audience. Davis, who was following the storm via satellite imagery on a laptop, explains: “We lost the main stage to lightning, but the VIP tent was [safe]. So on the fly, I would rearrange the show, pick the songs, make CNN go ad-free. … We all had a mentality that we had one single event per century and we had to keep it going. We knew the world was watching. CNN expected 200 million people to go online. We had talent there and a window coming up where we could stage it. We were going to try to capture him. It has just closed in on us.

Davis missed what he calls “the whole show” from CNN presenters Anderson Cooper and Chloe Melas, who vamped live for nearly three hours, but says network chief Jeff Zucker was “over the moon” and that Cooper “was having the time of his life. Davis adds:”[People] said it was one of the most compelling televisions they had ever seen.

That’s certainly a way to describe Gayle King FaceTiming, an impromptu acoustic performance by the Killers, who played their 2004 hit “Mr. Brightside” from a backstage dressing room, live in the world. In a way, it seems like the talent was just as keen to get on stage in any way they could. It turned the concert “into its own legend,” says Davis, noting that the two hours and 37 minutes that took place “were phenomenal for what it was – no one went hungry.” In fact, there was a group of participants who stayed close until the very end, chanting “NYC” defiantly.

So was there an emergency plan? The organizers had a “rain or shine” policy, but lightning was another matter. “I was with the mayor on stage when we saw the lightning, and we knew it wouldn’t be safe,” he says, pointing to $ 50 million in video screens and production equipment and the dozens of ‘teams responsible for breaking up production.

If anything, Davis’s own walk leaving the park late at night, after thanking the team, musicians, and staff – during which he waded knee-deep in water – proved that the abnormal storm was in itself something New Yorkers experience once in 100 years. “We left after 11pm and rivers of brown water were crossing – a flash flood of epic proportions,” he says.

Sunday morning Davis says he woke up with a “feeling of empty sadness.” Reflecting on the many weeks and countless hours that went into planning and setting up the event, he adds, “We really put Woodstock together. We were there for the biggest concert of all time. And it was memorable. It was a moment that no one will ever forget. And for that, I’m really proud.