Cripchick DISCOVER THE ART OF PUBLISHING
Home Climate justice What does the Inflation Reduction Act do to combat climate change?

After a long round of negotiations in the Senate, the House of Representatives passed the Inflation Reduction Act (IRA) and this week President Biden signed the landmark law. It is the largest bill ever passed by the United States to combat climate change, with nearly $370 billion earmarked to accelerate the transition to zero-carbon energy and reduce emissions. emissions by nearly 40% by 2030.

The IRA will achieve this through tax credits and rebates for various renewable technologies, such as solar panels, heat pumps and electric vehicles. It also earmarks funds to promote energy efficiency, retire polluting power plants and support communities disproportionately affected by pollution and climate change. And it includes $4 billion to deal with an “unprecedented drought” in the West.

Max Boykoff, professor and director of the Department of Environmental Studies and researcher at the Cooperative Institute for Research in Environmental Sciences (CIRES), discusses the impact of the legislation.

Max Boykoff directs the Media and Climate Change Observatory (MeCCO) and co-directs Inside the Greenhouse at CU Boulder.

How big is this bill for climate change?

This is a massive climate change bill. This is a step forward that gives impetus to other necessary steps to follow. To put it into context, this funding for climate action is about four times the amount of Obama’s stimulus bill in 2008. This really is a solid industrial policy bill that aims to reduce emissions, make clean energy cheaper and accelerate decarbonisation. energy systems. This is a real inflection point in terms of real money to really influence change on the demand side.

How will it help fight climate change?

This particular step will move us significantly towards the US government’s commitment in the Paris Climate Agreement to reduce emissions by 2030. This takes us to reduce up to 900 million to 1 billion tons ( 1 gigatonne) of carbon emissions, about two-thirds of the way to achieving the necessary 50% reduction below 2005 levels.

What will this money fund?

There’s also a methane emissions reduction program, so it’s not just about carbon dioxide. There will be financial penalties and $1.5 billion has been set up to monitor methane emissions and leaks. There is also $3 billion dedicated to heavy and clean vehicles. That’s a lot of money. The United States Postal Service, for example, can tap into these funds to clean (electrify) heavy vehicles.

There were also analyzes that revealed that this was going to be important, and not only in terms of reducing emissions. There are also funds in there to help with climate justice and just transition efforts to benefit frontline communities. One analysis estimates that there will be approximately 9 million green jobs created, well-paying jobs for this transition from fossil fuels to green energy. There is a credit for manufacturing plants that work in low-income communities to bring those green jobs to what used to be underprivileged communities. 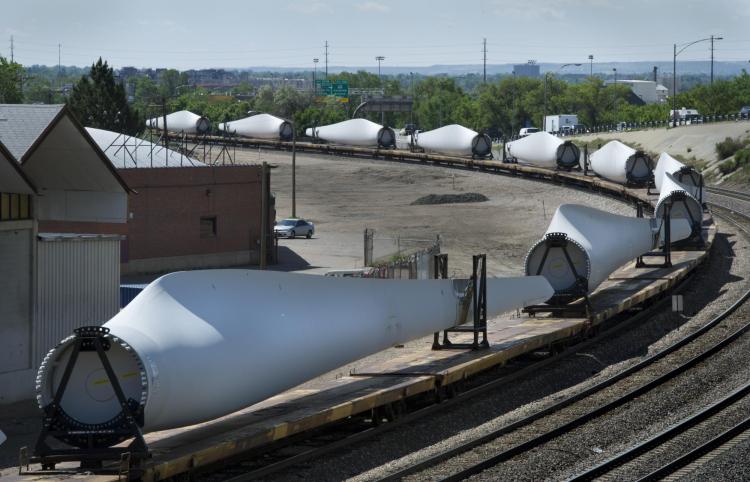 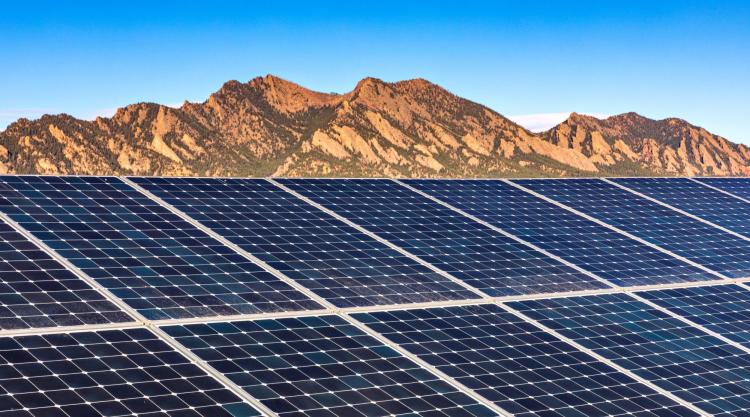 Top: Wind turbine blades being transported by train through Denver. (Credit: Dennis Schroeder/NREL) Bottom: A photovoltaic array on the Flatirons campus of the National Renewable Energy Laboratory (NREL), with the foothills of the Rocky Mountains as a backdrop. (Credit: Werner Slocum/NREL)

What does this mean for the average American? For the coloradans?

This law is very important to the average American. There are all kinds of elements that we’re going to start seeing. There has been a commitment of $27 billion to what is called a green bank, which will be a clean energy accelerator. It allocates $15 billion to underprivileged communities and encourages the adoption of community solar energy. It should be pointed out that the prices of solar power have fallen by 90% since 2009 and that wind power has also fallen by almost 70%, so the barriers to installing solar power on its roof are already much lower.

For those of us lucky enough to buy new vehicles, there will be some very strong incentives and tax rebates for buying electric vehicles. There will also need to be a certain percentage of domestic production for batteries and other auto parts to qualify for this rebate, which will then incentivize automakers to stimulate the US economy and bring green jobs home.

There is also $4.5 billion for heat pumps. If you switch to a heat pump in your home, you are heading towards electrification. If you get electricity from a clean energy grid, you are not dependent on natural gas. It’s the one that really excites me. Early estimates from the REPEAT group at Princeton and elsewhere show that American households could save hundreds, if not thousands, of dollars a year on energy bills: whatever the environmental gains, the IRA will save us silver.

How does this legislation advance environmental justice?

There is $60 billion earmarked for environmental justice. But, like climate change, environmental justice cannot be separated from other elements. There is 30 billion dollars intended to clean up the electricity sector. It’s going to help states and local governments switch to solar and wind, but it’s also going to help retire dirty coal-fired power plants and oil refineries. I can’t help but think a lot about the Commerce City refinery: the most polluted zip code in the country isn’t too far from where we are. This is actually a spending bill that has the potential to help residents of Globeville and Commerce City.

What was lost during the negotiations?

The invoice is imperfect. It was the result of a compromise. There are valid criticisms of what has been abandoned, such as the Civilian Climate Corps. The Build Back Better Act was going to get us about 1.2 billion tons of carbon dioxide reductions by 2030, when it would be about 900 million to 1 billion tons. So we see less emission reductions in this version. But there are other things in the bill that help us recapture some of the bulk of the effort in terms of long-term tax credit commitments, which means a consistent signal to the business sector to bring about these changes.

Some of the wrangling and final negotiations, particularly by Senator Manchin, had pushed for leasing land for oil and gas, which also came with leasing land for clean energy. Although this is a blow, I think it could largely remain a symbolic concession that has been made since only 1-3% of these leases are purchased and developed. Some of these losses are real, but they are offset by many other opportunities that we will see present themselves.

What other effects will this bill have?

The ERI effectively catalyzes the work of decarbonization and adoption of a clean energy economy. It comes with all sorts of benefits. Climate change is not a single issue that we can separate from things like public health, national security, etc. Climate change is a set of intersectional challenges. We will begin to see local air quality and public health benefits as oil refineries or coal-fired power plants begin to be phased out. This is going to be wonderful for people who live on the forefront of climate impacts. It will also benefit us in our day-to-day lives: we will begin to feel that we live in much healthier communities.

It’s something we can be proud of as the United States heads into the UN climate negotiations in Egypt (COP27) in November, but it’s a milestone with many more to follow.